John Hanson and Rob Nilsson, co-directors of Cannes Camera d’Or winner Northern Lights and fellow members of San Francisco’s Cine Manifest film collective, collaborated on this remarkable series of documentaries underwritten by the North Dakota Humanities Council and the North Dakota AFL-CIO. In Prairie Fire, 97-year-old ex-organizer and poet Henry Martinson recounts the 1916 birth of the Socialist Nonpartisan League—also the subject of Northern Lights—his narrative accompanied by images shot by Nilsson’s own grandfather, Frithjof Holmboe. Rebel Earth finds Martinson, accompanied by a younger farmer, revisiting the scenes of his life, seeking out the spot of his Divide County homestead. Survivor, finished the year before Martinson’s death, focuses on the biography of its subject, found in a funny and expansive mood. A gorgeously-shot work of documentary-as-historical corrective, which finds hope for the future through excavating a radical past.
Posted by dp at 7:43 AM 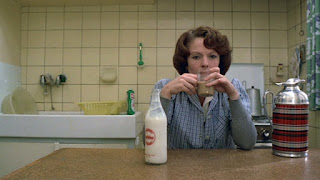 A landmark of feminist art, Chantal Akerman’s minimalist masterpiece is both a monumental and microscopic view of three days in the life of a fastidious Belgian single mother (a sphinx-like Delphine Seyrig) as she goes about her housework, peeling potatoes and washing dishes with the same clinical detachment with which she makes love to the occasional john. And then slowly, almost imperceptibly, things begin to go awry… The rigorous, relentlessly impassive gaze of Babette Mangolte’s camera is transfixing but, in the words of the director, “never voyeuristic”; it’s a uniquely feminine way of seeing made manifest by one of the most sui generis filmmaker-cinematographer partnerships in history.
Posted by dp at 7:36 AM